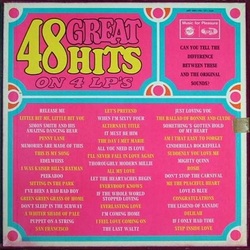 In 1968, with the Hits series still a relatively new idea, mfp decided to assemble the four LPs to date - Hits '67, Smash Hits, Heart Hits and Hits '68 - and re-issue them as a deluxe box set. Pictured above is the lid of the box, which was made from sturdy maroon card with a hinged spine, originally held shut with a gold sticker..

The LPs inside are all standard pressings, and each was housed in a plain white inner sleeve. Along with them was a printed insert, which gave a track listing for each of the LPs, plus sleeve notes - but not the original notes - they had in fact been changed around, containing many of the original comments and sentences, but restructured and rewritten.

The box presumably sold very few copies since it is hardly known today. It does not have a catalogue number as such, quoting the four LP's catalogue numbers on the front instead.

Below are some more images. 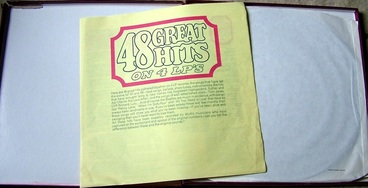 It will be noted that the artwork on the front is an adaptation of the cover of Hits '67. The text frames are virtually the same, but turned sideways, with just one or two minor adjustments to make things fit.